FINALLY…it was vacation time.  We didn’t think this day would ever get here! It’s kind of bittersweet because once its here you know it’s also soon over.  But that only means we should book another right?!?

and we’re off to Toronto!

We spent the night in Toronto as our flight was at noon the next day and with traffic we would never make the 3 hour prior departure time.  We got a hotel near the airport so it was convenient the next day.  When we arrived Maison went straight to bed  and Bria…well let’s just say she thought it was a great idea to shower and curl her hair at 11:30pm. She was way too excited to even think about sleep!  I think she finally crashed around 12:30am.

I woke at 3am and could not get back to sleep.  Wondering if I remembered to pack everything, did I have passports? (I knew I did), was Cooper and the cats gonna be okay? 101 questions were running through my mind.  6:15 I got everyone up.  Bria was up and ready in no time and Maison and Kerry had to be reminded a few times to get moving. 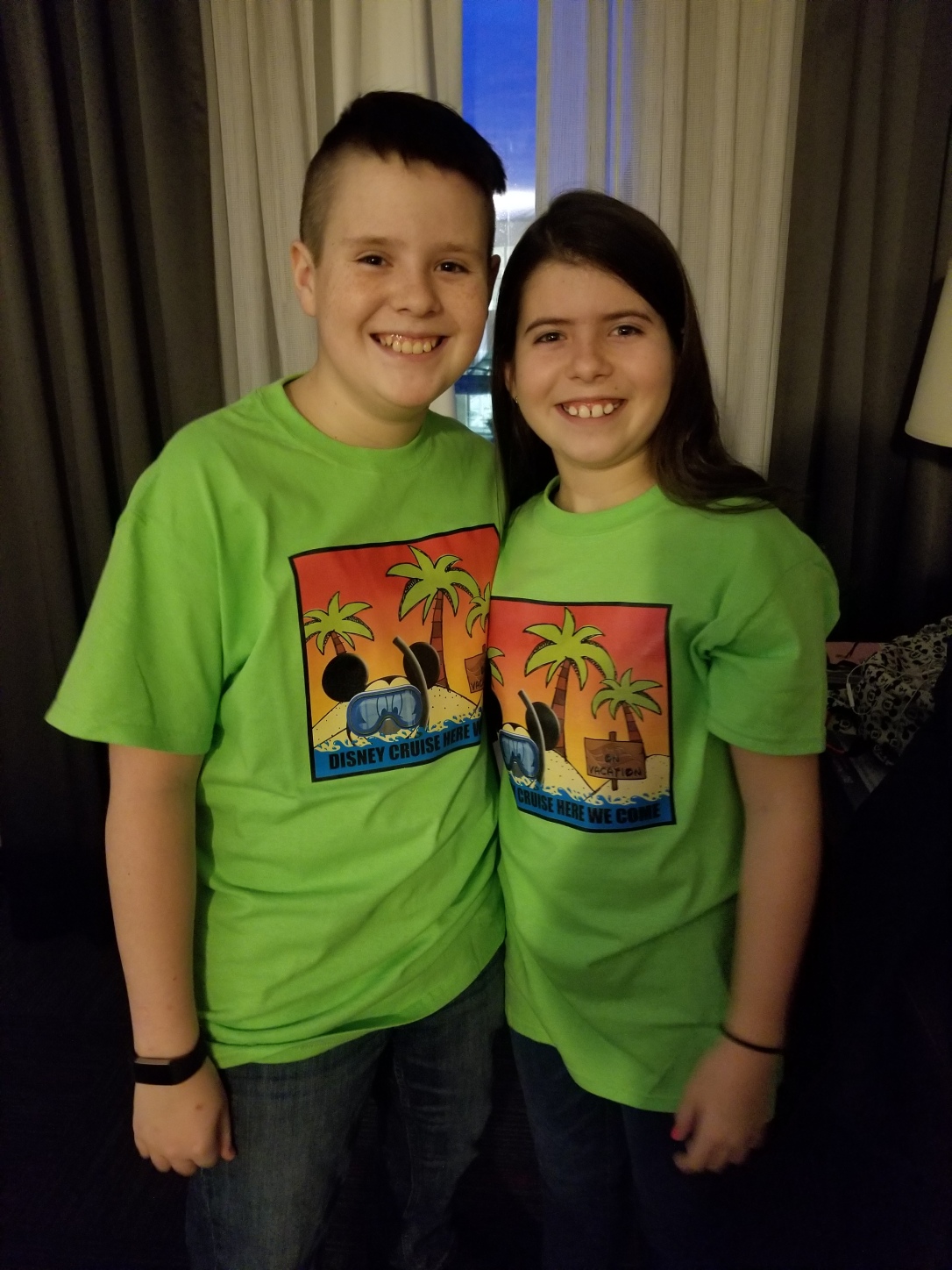 They were pretty excited and we were soon on our way.  It was super cold when we left for the airport so leaving Canada and heading South was a bonus!   We headed to Park and Fly around 8:00. That was a very fast process as there was a shuttle waiting for us as soon as we unloaded our luggage.

Off we go to the airport!  At this point the nerves were starting to settle cause at least we were this far and our cruise wasn’t leaving for 3 more days.  We wanted lots of time to get there because flying in January in Canada can sometimes be a disaster.  I would always go at least 2 days prior to sailing because you never know what can happen.

We arrived at the Delta check in and none of our bags were overweight…SHOCKER!  I tend to over pack and that will never change haha!  Customs was fast and we met a few people in the line that were also heading on a Disney Cruise as well.  I tend to talk to anyone and everyone so it’s never boring standing in a line with me.  We found our gate and some breakfast.  We had 2 hours until boarding for our flight to Atlanta, Georgia.

Our plane arrived and the boarding announcement was made.  5 minutes later they announced delayed boarding.  5 minutes later delayed a little more.  Now what could be wrong?  It was a gorgeous day in Toronto as well as Atlanta so it wasn’t the weather.  The pilot announced that our plane had technical difficulties while landing.  I mean everyone loves to hear that before boarding right??  They had to wait on a part for the plane so Bria thought it was a perfect time to do homework and Maison thought she was crazy…first day on vacation and he was having no part in homework!

After an hour we were ready to go! The plane was fixed and it was boarding time.

Our flight was smooth.  Kerry watched a movie, Maison did some drawing and had a nap, Bria wasn’t tired so she kept me company! 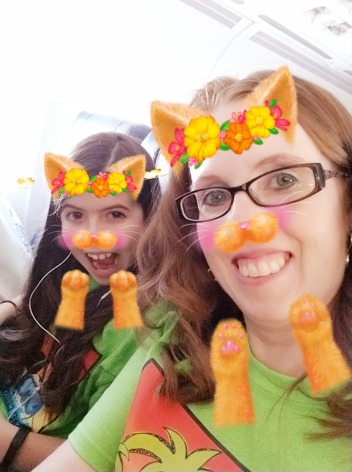 We arrived in Atlanta safe and sound.  We had a layover here so we headed to baggage and looked for our hotel transfer.  Now nobody told us how big Atlanta airport was and that we had to take a 10 minute bus ride to the other terminal to find the hotel shuttles.

We didn’t care about waiting 10 minutes for the shuttle because it was much warmer here than it was in Toronto when we left and the fresh air felt so nice.  We arrived at our hotel, quickly took off out travel shirts(we needed them again for the next flight) and ordered a pizza and wings!  We were all showered and in bed at 8:30pm.

4am…RISE AND SHINE!  Our hotel had breakfast at 5am so we were up and ready 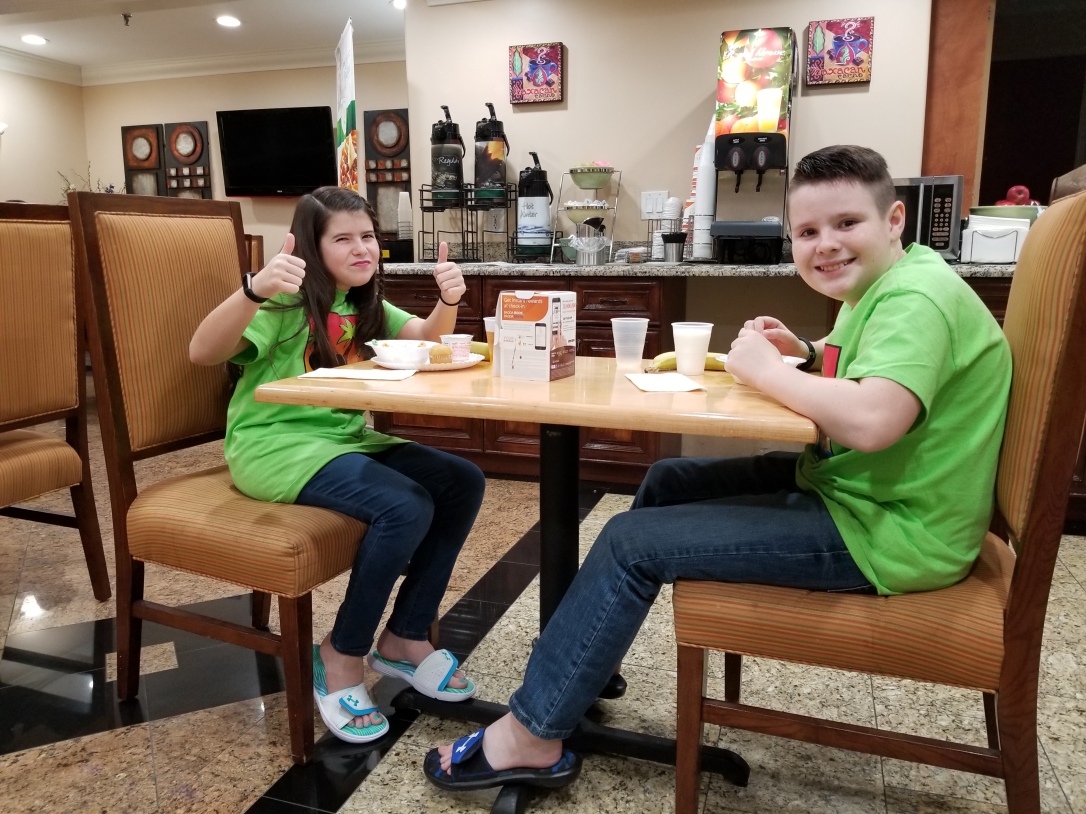 Our shuttle arrived at 6am and we were on our way again!  Checked in (again Atlanta airport is huge), found our gate and we waited.  Maison had a nap and Bria don’t nap so she played on her ipad and kept me entertained.

Boarding time again and we were the first one’s on, thanks to Delta for honouring our Military.  I have never been in a airport that thanked their Soldiers every 20 minutes over an announcement…so awesome!

Maison sat with Dad this time and they watched some horror movies like they do.  Bria and I watched a Disney movie of course and I caught up on my travel journal! 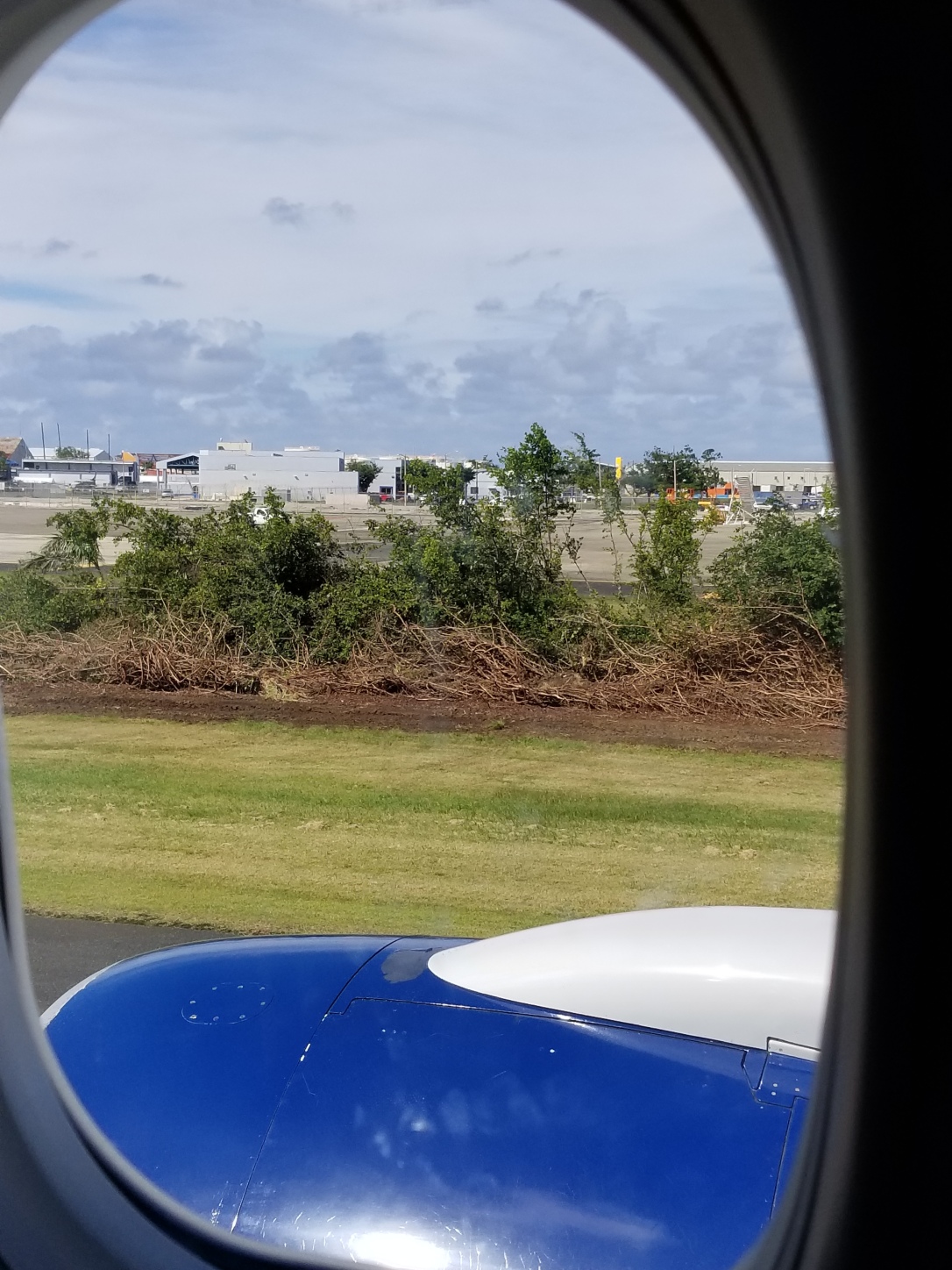 As you can see the damages from the hurricane were very obvious in San Juan.  We got off and headed to baggage.  We didn’t know what to expect at the airport because we had heard of some damage there as well.  It was very clean, people were very welcoming and it was hot.  No air conditioning but I didn’t mind at all because I love the heat!

We are all super excited about our cruise but Maison’s excitement level may be a little higher that ours.  On our cruise in 2016 he met his best friend Brody.  Since then they have kept in contact and I mean daily!  These 2 boys really became best buds.  When we booked our vacation Brody’s parents booked as well and the boy’s were so happy!  Brody was arriving later in the evening and Maison must have asked a million times if he was here yet.

If you ever arrive in San Juan and need a taxi, it’s so easy.  You take your luggage outside and there is a person waiting and will ask you where you want to go.  She will write the price on a piece of paper and you wait in line for the next available taxi.  We waited about 5 minutes and again, found some more Disney friends in the line to have a chat with.   Our taxi cost $25.00 and it was a 15 minute drive.

Our taxi driver was super nice and gave us a lot of information about San Juan.  He told us a must see was The Forts.  We arrived at Ciqala Inn and Suites and check in was easy.

The kids got word about a rooftop pool.  After 5 minutes of arriving in our room we got out of our jeans and got out the swimming attire!  The kids were so excited!  I mean after a 4am wake up, day 2 of travel and everyone sleep deprived, who needed to relax or have a quick nap anyway?  Not this family!!

It was an awesome experience and the view was AMAZING!  We finally got the kids out and back to the room as we were all starving!

Where do we go for supper? There were no restaurants within walking distance (well there was but I was a little unsure about walking at night).  What do we do??  Nobody spoke much English so calling a taxi was going to be a challenge.  I had the bright idea of downloading Uber and giving that a shot!   Well that was fun!  No idea what we were doing but our driver soon arrived and of course Kerry sticks me in the front seat.  She goes on and on and on in Spanish!  Remember I said English wasn’t my strongest point? well imagine me trying to communicate in Spanish!  I made it very clear that I was English and she tried her best to talk to us.  She got us to one of our favorite restaurants and that was all that mattered at this point.  We will figure out how to get back later!

It was BUSY and since the hurricane they lost a lot of their staff so there wasn’t many servers.  We did manage to leave with a full belly though!  Maison was getting very antsy at this point because he knew Brody was soon arriving.  We managed to get another Uber back to our hotel and it cost 3 bucks!

Brody is in the building!!

It honestly felt like Christmas Eve.  I’m pretty sure Maison was more excited than he was at Christmas haha!  Tanya sent me a text to ask us our room number as they were coming to see us.  Maison waited by the elevator and he was just so happy!

and that was the last time we seen Maison and Brody for the whole trip!  Just kidding,  but these 2 were inseparable for 2 weeks.  We all chatted for a few hours, the kids exchanged some treats they had for each other and then we went to bed.

Tomorrow is a new day and a new adventure!