Waking up in the cove…

I never in a million years thought I would be sleeping at Dad’s old fishing stage.  After spending a few days home, I thought it would be a great idea to spend the night.  We packed up and headed down.  It was a gorgeous night and not a draft of wind.

We set up our bed and set the alarm for the morning as we were going cod fishing with Dad.

The Cod Fishery is only open for a short period of time.  For the 2018 summer season,  it was open on weekends (Saturday-Monday) from June 30th-September 3rd.   You were allowed to catch 5 per person with a maximum of 15 per boat each day.

I don’t know why I set the alarm because I was up way before it was time.  We planned on leaving the wharf at 7am but that quickly changed.  I woke at 4:20am.  I heard the first boats heading out to the fishing grounds so I got up and sat on the wharf to watch them.  It was kind of funny because my sister who works at the bakery across the cove from the Stage wasn’t expecting to see me sitting on the wharf at 4:45am when she went to work!

I was dying to go into the house to get Dad up so we could head out.  It was a gorgeous morning and 4 boats have already left the cove.

That was it!! I got hubby up, told him to put the kettle on and I left the Stage to go get Dad.  I walked in because it was super early and I didn’t want to wake everyone up with the bike.

5:15am-here is my walk from the Stage to the house.

If I only knew how many trips Dad and Pop have made up this hill over the years.

The back of the Stage and our ride

Down this hill to the main road…Jim’s Cove Crescent

and the winding road to Mom & Dad’s house.

Mom & Dad raised 4 kids in this house.  It holds a lot of memories, which most have been made around a table of food that Mom made for us.

As I was walking in the hall to get him up, he was walking out.  His exact words were “boats been going out the cove since half past four.”  I was up and tired waiting. Now, this got Dad in a huge hurry.  The fisherman in him kicked in full force and he was almost running around the house to get ready.  I told him I would meet him on the wharf and I headed back down. What a gorgeous view!

He was there about 2 mins after I arrived, ready to go!

But first I was having my cuppa tea

Here we go, off to catch some fish!

Watching the sunrise while on the ocean is pretty spectacular

The Captain and the crew

Lots of boats out today, the waters aren’t always this calm around here

If I only knew the bay as good as Dad did!  Let’s hope he can put us on some good fishing grounds!

Of course, he did!  Our first fish was in the boat.  If we didn’t get any more it was ok, we had enough for supper, but then again, I would never hear the end of it if I didn’t catch one!

Oh goodness!  Dad thought I must have had a shark based on how hard I worked to get him in!

My cousins were fishing next to us

and they captured a picture of us as well

We got a few fish in that area and then they all disappeared.  Dad said there wouldn’t be much fish around yet because the capelin wasn’t in…he was right! We managed to get 10 and that was plenty for us!

We decided to head back because Skipper was getting hungry.  He skipped breakfast this morning because he was in too big of a hurry.  Anyone who knows Dad, he got to have his breakfast so 8am we headed back in.  According to Dad, when I’m home, he doesn’t have time to eat haha!

Detour to the beach

Growing up we spent a lot of time on the beaches around the bay.  Not your typical sandy Caribbean beach but they were cool with treasures to be found.  I would always find cool rocks to bring home (or a bucket full).  Dad knew how much I loved to stop at the beach and I’m sure he knew I would find something to bring home.

This place according to Dad is called “Back of White Point Hill.”  Years ago, Dad and Pop would be lobster fishing in their old motorboat and the weather wasn’t always the nicest in the spring of the year in Newfoundland.  It didn’t matter what the weather was like though, you still had to venture out and haul your pots.  Lots of days it would rain.  They would be wet and cold.  They would always go to this beach for shelter from the miserable weather.  They would light a fire and have their lunch on the beach.  There was always dry wood there and that was just what they needed on those dreary days.   When Pop didn’t fish anymore,  Dad carried on the tradition of going there to get out of the bad weather.

I love pictures of lobster pots and especially how they connect to the story.

We were about to leave and I told Dad I wanted a picture of us on the beach.  Trying to get a sensible picture was quite a challenge.  This was his pose of the day!

I told him we would stand here all day until we got the picture.  He then told me he wasn’t going anywhere else with me because I take too many photos.  It wasn’t the first time hearing that and he went again that afternoon haha!  He secretly loves it!

Heading back home and of course, I found some treasures!

Breakfast in the cove

Mom was waiting for us to get back because she was preparing breakfast for us.  In the middle of it all, she got called in for work.  I went to the house and got what she had started and headed back down the stage to finish it.

Ham, eggs, homemade bread made by mom and homemade jam made by me…delicious!

Time to clean the fish

We caught the cod, now we have to cook it for supper.  At The Stage, we usually have a big ole feed and the more the merrier.  Today we had a total of 17 for supper so we did a little extra to go along with our cod.

Here is our fish we caught.  Deep fried in batter…delicious! Can’t get much fresher than this!

Dad was in charge of the turkey, which we also deep fried.  Nobody is on diet at The Stage!  If you want delicious turkey, ask the skipper to cook one for you.

It was a gorgeous evening in the Cove.  Some of our supper guests took the canoe out for a row.  Just wait until you see the rowing team from the Olympics a little later!

Family, Friends and Food! What more can you ask for?

We had a special visitor for supper and I am so glad we got to spend some time with him and his beautiful family.  These 2 have been a part of each others lives for a very long time.  I could write a separate blog just on the stories of these two! 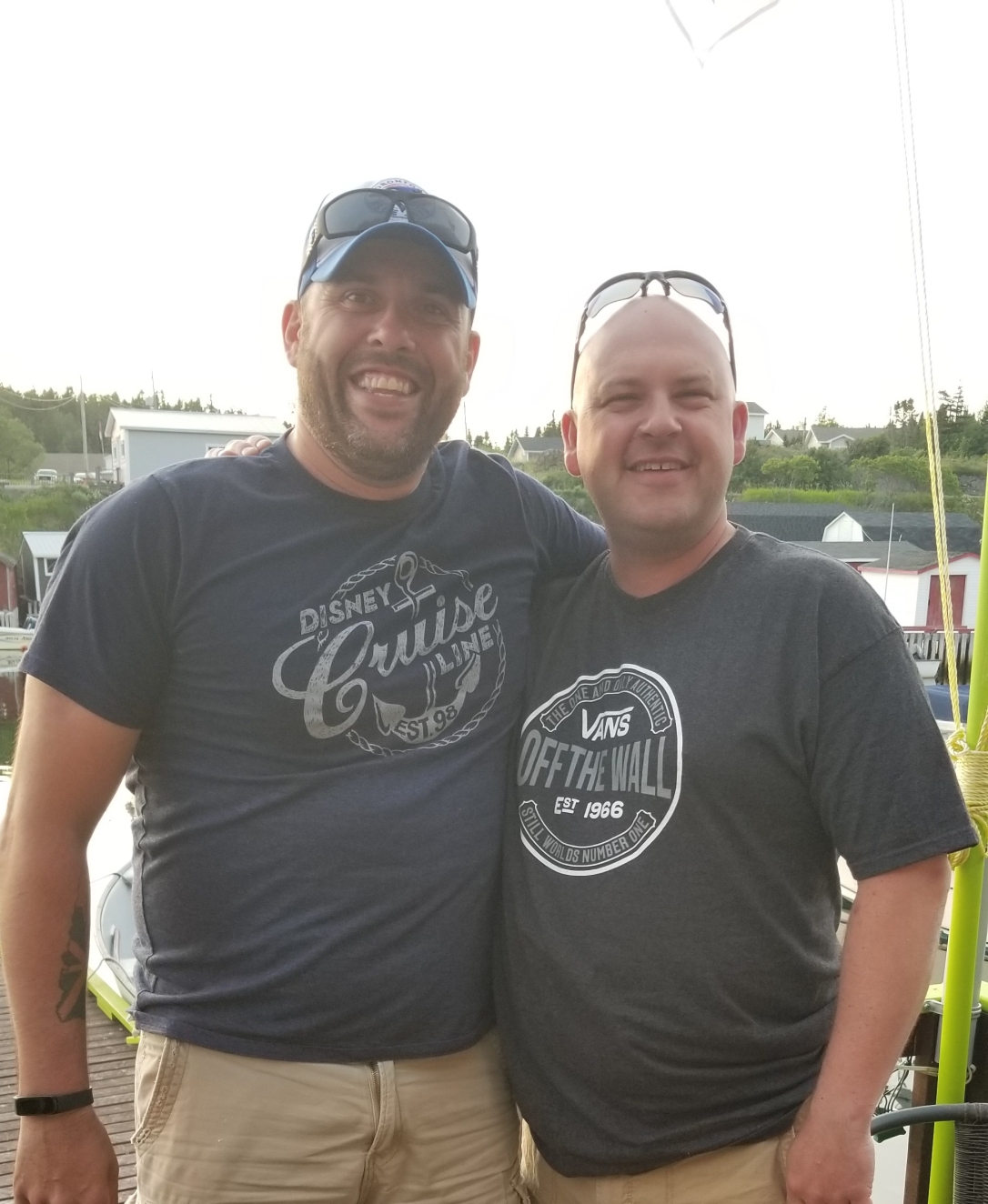 All week I have been wanting to try the canoe but I’m not that brave when it comes to water.  I’m literally petrified and I was only in a canoe once in my life.  Who better to ask than my sister, who I am pretty sure is a little more scared of water than me!    But…here we go!  We put on our brave face and set sail!  We had quite the audience too and they all had a great laugh at our lack of rowing skills haha!

Neither one of us knew what we were doing but we managed to get around the cove a few times and back to the wharf.  I have to admit, I think it gave me a few wrinkles!

It was the perfect ending to a perfect day!

24 hours well spent and so many memories in such a short time!